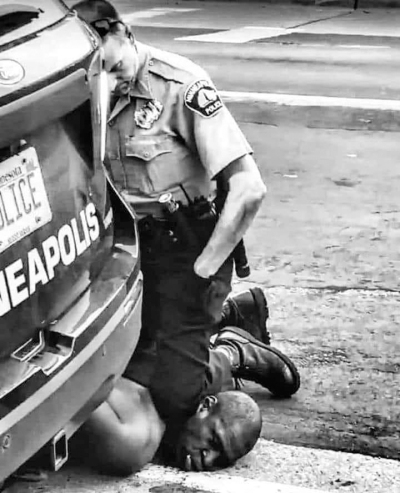 Jesus, Lord, help us to repent.

John 13:35 By this all people will know that you are my disciples, if you have love for one another.”

In general, broadly speaking, knowing there are exceptions, but as a basic principle, hasn’t white evangelical America played the role of the priest and Levite in the story of the Good Samaritan? Ever since the very beginning when we pushed the native Americans to the driest, most barren parts of our country with a sigh of “Good riddance,” haven’t good, Christian, church-going white people been ignoring the plight of people of color in our country?

The priest and the Levite did nothing to harm the Samaritan who had been attacked, beaten, robbed, and left for dead by the side of the road. They didn’t throw a stone at him or kick him out of the path. Their sin was that they saw, they witnessed, they understood, and they chose to ignore. They probably said their prayers that night.

Perhaps Trump’s Christian base made an honest error in electing him the first time. But in the wake of all the violent murders, beatings, and oppression by rogue policemen in our country, not just now with the slaying of George Floyd, but the year before that, and the year before that, and the year before that…all the way back to the 1600’s, how can we possibly elect a man for a second term whose mouth spouts hatred, insults, and lies against our fellow human beings with every other tweet? We need to repent on our knees before God, confess our sin of indifference, and elect people at the national, state, and local levels who not only promise to change the culture of policing in America, but people who will actually do it.

And on a personal level, what can white evangelical Christians do? Just for starters, speak out. Call a spade a spade. Don’t tolerate the kind of language we hear from our President on a daily basis. Don’t vote for him. Vote for someone else. Don’t remain silent when you hear your neighbors disparage people of other colors, races, religion, nationality, and cultural mores. Jesus did not appoint us to judge others–he appointed us to love. Write letters to elected officials, including the chief of police in your community when you hear of atrocities. Don’t vote for offenders a second time. Require accountability from policemen.

And what about the aborted unborn? Don’t use them as a scapegoat to excuse our blind eye toward the unjust violence against entire races of people around us. Attend rallies, join a pro-life group, such as 40 Days for Life, buy tickets to movies such as, “Unplanned,” for all your neighbors and your church’s youth group, support your local charities with diapers, baby blankets, clothes, and words of encouragement and love for women without supportive homes for their newborns. Donate. We don’t need a foul-mouthed president in our fight against abortion. Especially when the world he espouses is dangerous for all children and adults not exactly like himself.

To “love our neighbor” means we need to leave our zones of comfort and actually DO something. We need to stoop, bend, lift, carry, and pay for. Only then will America begin to heal.

Father, forgive ME, for I have sinned. I helped kill George Floyd. Help ME to do better.