The crux of King Hezekiah’s history in the context of Israel’s history, however, is not Hezekiah’s character, but the character of God.

Will God Come Through for Jerusalem?

“Rabshakeh” is the title given the emissary/military general who represented the King of Assyria (36:2). The threat was real–very close, very imminent, right at Jerusalem’s front door.

Rabshakeh lied. He bluffed. His purpose in Isaiah 36 was to talk his way into victory. He pressed all the psychological buttons he could think of. His purpose was to get the people to forsake their king (Isaiah 36:14) and give up without a fight (Isaiah 36:16-17). He promised them peaceful prosperity until the day when he would take them away to the happy, happy land of captivity.

Rabshakeh exemplifies the tactics of our spiritual enemy, Satan. Satan attacks our faith in God by subtly twisting his character and lying to us about him. His goal is to make us fearful of possibilities and potential outcomes that have not yet occurred. He paints a very dour picture of the present and future, tempting us to give up without a fight.

These were the tactics of Rabshekah. His main argument was that Hezekiah’s God was no different than all the other “gods” whom Assyria had vanquished. Hezekiah realized that indeed these other “gods” were false idols, blocks of wood and stone (Isaiah 37:18-19). They failed the countries which clung to them. But Hezekiah knew that his God lived, had power, and would save them. And, in the end, God did. He came through for Jerusalem at this time, because of Hezekiah’s strong faith in him. 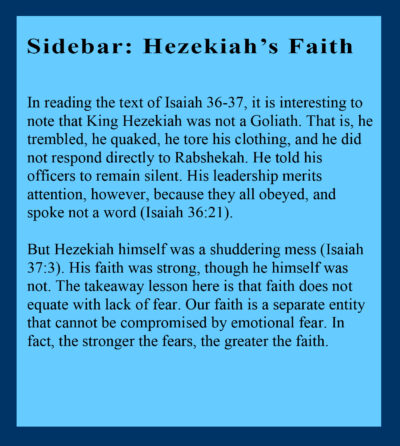