Home » A. Bible Studies » Signs Part 2: Water to Wine and Cleansing the Temple Compared and Contrasted

Signs Part 2: Water to Wine and Cleansing the Temple Compared and Contrasted 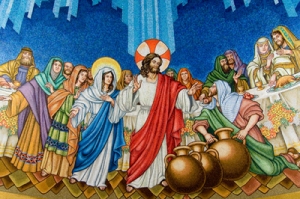 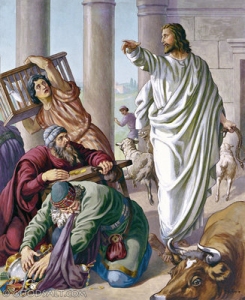 ESV  John 2:12 After this he went down to Capernaum, with his mother and his brothers and his disciples, and they stayed there for a few days.

13 The Passover of the Jews was at hand, and Jesus went up to Jerusalem.

14 In the temple he found those who were selling oxen and sheep and pigeons, and the money-changers sitting there.

Malachi 3:1 “Behold, I send my messenger, and he will prepare the way before me. And the Lord whom you seek will suddenly come to his temple; and the messenger of the covenant in whom you delight, behold, he is coming, says the LORD of hosts.

15 And making a whip of cords, he drove them all out of the temple, with the sheep and oxen. And he poured out the coins of the money-changers and overturned their tables.

16 And he told those who sold the pigeons, “Take these things away; do not make my Father’s house a house of trade.”

Isaiah 56:7 these I will bring to my holy mountain, and make them joyful in my house of prayer; their burnt offerings and their sacrifices will be accepted on my altar; for my house shall be called a house of prayer for all peoples.”

17 His disciples remembered that it was written, “Zeal for your house will consume me.”

Psalm 69:9 For zeal for your house has consumed me, and the reproaches of those who reproach you have fallen on me.

18 So the Jews said to him, “What sign do you show us for doing these things?”

19 Jesus answered them, “Destroy this temple, and in three days I will raise it up.”

20 The Jews then said, “It has taken forty-six years to build this temple, and will you raise it up in three days?”

21 But he was speaking about the temple of his body.

22 When therefore he was raised from the dead, his disciples remembered that he had said this, and they believed the Scripture and the word that Jesus had spoken.

NET  Acts 10:40 but God raised him up on the third day and caused him to be seen,

ESV  1 Corinthians 15:4 that he was buried, that he was raised on the third day in accordance with the Scriptures,

John 20:16 Jesus said to her, “Mary.” She turned and said to him in Aramaic, “Rabboni!” (which means Teacher). [Mary’s and Jesus’ post-resurrection meeting here]

Scripture includes poetry. God is a poet. (Anyone having marveled at a sunrise or sunset must know that this is true.) The Psalms are poems; The poetry of Psalms is Scripture.

2 Timothy 3:16 All Scripture is breathed out by God and profitable for teaching, for reproof, for correction, and for training in righteousness,

John’s prologue, verses 1-5, though prose, is a most profound and beautiful poem expressing eternal truth with very few and very simple words. (John 1:1-5)

And like most poets, John uses symbolism to develop layers of meaning.

Disclaimer: To say that John is a poet does not mean that the events he describes are “poetic” only. This author believes as literally true every word that John writes. But God as poet designed events to occur which were in and of themselves symbolic of spiritual realities. This is, after all, the New Testament, where Spirit overtakes and surpasses concrete types. (We will see this spelled out in John Chapters 3 and 4.)

The Symbolism of Chapter 2

Scene 1 is about purification: the water of purification was turned into wine, which represents Christ’s blood shed for the remission of sins, i.e., for purification from sins.

John 2:6 Now there were six stone water jars there for the Jewish rites of purification…

John 2:7 “Fill the jars with water,” Jesus told them. So they filled them to the brim.

John 2:9 When the chief servant tasted the water (after it had become wine)…

John 2:4 …My hour has not yet come. [The hour of Christ’s crucifixion: John 17:1 …”Father, the hour has come; glorify your Son that the Son may glorify you,”]

Revelation 7:14 …They have washed their robes and made them white in the blood of the Lamb.

Hebrews 9:22 Indeed, under the law almost everything is purified with blood, and without the shedding of blood there is no forgiveness of sins.

1 John 1:7 But if we walk in the light, as he is in the light, we have fellowship with one another, and the blood of Jesus his Son cleanses us from all sin.

Scene 2 is also about purification: Jesus chased out from the temple the money changers and the sellers of sacrificial animals. The problem, as much as doing business in God’s house of prayer, was that these merchants were cheating the people right and left, overcharging and selling for large profits. (Matthew 21:13) And one thing extremely clear from the Old Testament is that God loves his poor people.

Isaiah 58:5 Is such the fast that I choose, a day for a person to humble himself? Is it to bow down his head like a reed, and to spread sackcloth and ashes under him? Will you call this a fast, and a day acceptable to the LORD? 6 “Is not this the fast that I choose: to loose the bonds of wickedness, to undo the straps of the yoke, to let the oppressed go free, and to break every yoke? 7 Is it not to share your bread with the hungry and bring the homeless poor into your house; when you see the naked, to cover him, and not to hide yourself from your own flesh?

Water to Wine and Cleansing the Temple Side by Side: Their Symbols Compared and Contrasted

1. Cleansing occurs in both scenes.

Scene 1 is an inward cleansing of heart and mind received by drinking the blood of the Lamb through faith.

Scene 2 is an outward cleansing of God’s temple which Jesus accomplished by rejecting and casting out the impure elements of sinful theft fueled by monetary greed.

2. The two cleansings result in opposite effects for those involved.

In Scene 1 drinking the blood of the Lamb (symbolized by the wine that Jesus created) results in joy, festivity, happiness, celebration, and fellowship of family and friends.

In Scene 2 the sin of hardened hearts (repeatedly and willfully stealing from the poor under the excuse of religion) results in shame, confusion, anger, bitterness, and exclusion from the temple, which symbolizes Christ himself.

3. The two cleansings sum up the Gospel message of salvation vs judgment.

John 3:16 “For God so loved the world, that he gave his only Son, that whoever believes in him should not perish but have eternal life. 17 For God did not send his Son into the world to condemn the world, but in order that the world might be saved through him. 18 Whoever believes in him is not condemned, but whoever does not believe is condemned already, because he has not believed in the name of the only Son of God.

John 5:22 The Father judges no one, but has given all judgment to the Son,

John 12:48 The one who rejects me and does not receive my words has a judge; the word that I have spoken will judge him on the last day.

ESV  John 20:31 … these are written so that you may believe that Jesus is the Christ, the Son of God, and that by believing you may have life in his name.

A Kind of Belief  That Yields No Permanent Beneficial Outcome

John 2:23 Now when he was in Jerusalem at the Passover Feast, many believed in his name when they saw the signs that he was doing.

24 But Jesus on his part did not entrust himself to them, because he knew all people

25 and needed no one to bear witness about man, for he himself knew what was in man.

Later in John, we see people like these–those who follow Jesus because of his miracles only–turning back when the teaching becomes too costly (difficult) for them to accept.

John 6:66 After this many of his disciples turned back and no longer walked with him. [Read the entire context here and an even broader context here.]

John 6:36 But I said to you that you have seen me and yet do not believe. 37 All that the Father gives me will come to me, and whoever comes to me I will never cast out. 38 For I have come down from heaven, not to do my own will but the will of him who sent me. 39 And this is the will of him who sent me, that I should lose nothing of all that he has given me, but raise it up on the last day. 40 For this is the will of my Father, that everyone who looks on the Son and believes in him should have eternal life, and I will raise him up on the last day.”

Can we see how the verses above, which come later in John, relate to the two scenes in Chapter 2? John foreshadows the rest of his gospel in his simple recounting of Jesus’ changing water to wine  and the cleansing of the temple (Scene 1 and Scene 2), which, inspired by the Holy Spirit, he places side by side at the outset of Christ’s public ministry.

What about me? Is my heart’s desire the joyfully glad cleansing of Scene 1–drinking the wine of Christ and joining the festive wedding celebration–

–or do I prefer the cleansing of Scene 2–being cast out by Christ, away from him and all his people, away from the wedding feast?

New Testament Scripture teaches very clearly that I will be cleansed by Christ. Which shall it be? The joyful cleansing of salvation? Or the painful cleansing by exclusion that comes with judgment?

The verses above were written by John, the same John who wrote the Gospel of John. And so we see by John’s theme in his gospel (John 20:31 … these are written so that you may believe that Jesus is the Christ, the Son of God, and that by believing you may have life in his name) that he is very much an evangelist at heart. He wants us to believe, to find life, and to be spared from the judgment of Jesus Christ upon all people who reject the living wine–the blood of his life sacrificed on the cross–which alone leads to eternal life.

This is what the Bible teaches, and I verify that the life in Christ that John teaches is true. I have not yet witnessed the final judgment–no one has because it hasn’t happened yet. And if the one is true–life in Jesus–why would the Bible be lying about the other?

What about you? As seen in chapter 1, Jesus hears your thoughts even now. And this is the promise he extends to the whole world:

Joel 2:32 And it shall come to pass that everyone who calls on the name of the LORD shall be saved. For in Mount Zion and in Jerusalem there shall be those who escape, as the LORD has said, and among the survivors shall be those whom the LORD calls.

Acts 2:21 And it shall come to pass that everyone who calls upon the name of the Lord shall be saved.’

Romans 10:13 For “everyone who calls on the name of the Lord will be saved.”

What about you? What about now? Call out to the Lord and be saved!

Link to the Outline of the Gospel of John

By Christina Wilson in A. Bible Studies, Academic/Biblical, Gems from John on September 30, 2016.
← Signs Part 1: Turning Water into Wine So GO and Invite! →