(Link to Outline of John) 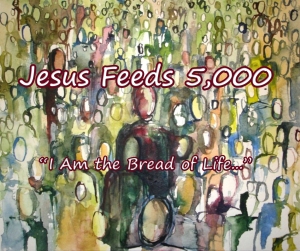 Many of Those Whom Jesus Fed Later Rejected Him (John 6:66).

John supplies a key to their actions:

NIV  John 6:15 Jesus, knowing that they intended to come and make him king by force, withdrew again to a mountain by himself.

This was an unruly mob ruled by the concrete reality of their stomachs. They wanted control over a puppet king of their own making, one who would do their own bidding and feed them on demand. They had no interest in Jesus as a person–who was this amazing man? Nor did their eyes lift to the heavens to recognize the source of the awesome power Jesus displayed. Their interest in him was earthbound, not spiritual.

The writer John explores their attitudes and motivations later as Chapter 6 continues.

Application: How does this miracle demonstrate John’s theme–that Jesus is the Son of God. What does this mean for me personally in my own life?

Genesis 1:2 …  And the Spirit of God was hovering over the face of the waters.

After the miracle of the bread and fish, Jesus sent the crowds away. Then he sent his disciples away into the one boat down on the shore and bid them sail to the other side of the lake, while he himself retreated into the mountains to pray. He prayed for a good deal of the night, while his disciples rowed against the wind on high seas in a fierce storm. By the middle of the night, they were still out in the middle of the lake, suspended half way from shore to shore, about 2-1/2 miles out.

Suddenly, an apparition-like form came moving across the water, and the disciples in the boat were terrified. The form spoke in a familiar voice, “It is I; do not be afraid.” At this, they recognized that it was Jesus, and they willingly brought him into the boat. Again suddenly, all at once, they found themselves and the boat on the shore towards which they had laboriously been rowing for hours.

Question: How does this fifth sign achieve John’s thematic purpose of demonstrating that Jesus is the Son of God? How does this affect me in my life personally?

And the Spirit of God was hovering over the face of the waters.

This miracle-story should be accepted by faith. If one does not believe it, however, let him not try to explain it away. Let him be honest and say, “I do not believe it.” (Hendriksen, vol. 1, 227)