(Link to Outline of John)

• Section 1 (John 10:1-21) continues the discourse with the Pharisees after Jesus gave sight to the man with congenital blindness.

• In Section 2 (John 10:22-42) Jesus claims to be co-substantive (same substance) as God the Father; therefore, equal with God.

John 10:7 So Jesus again said to them, “Truly, truly, I say to you, I am the door of the sheep. 8 All who came before me are thieves and robbers, but the sheep did not listen to them. 9 I am the door. If anyone enters by me, he will be saved and will go in and out and find pasture. 10 The thief comes only to steal and kill and destroy. I came that they may have life and have it abundantly. 11 I am the good shepherd. The good shepherd lays down his life for the sheep. 12 He who is a hired hand and not a shepherd, who does not own the sheep, sees the wolf coming and leaves the sheep and flees, and the wolf snatches them and scatters them. 13 He flees because he is a hired hand and cares nothing for the sheep. 14 I am the good shepherd. I know my own and my own know me, 15 just as the Father knows me and I know the Father; and I lay down my life for the sheep. 16 And I have other sheep that are not of this fold. I must bring them also, and they will listen to my voice. So there will be one flock, one shepherd.

Jesus presents himself as the Good Shepherd, in contrast with the Pharisees, who are false shepherds–thieves and robbers, i.e., “bad shepherds.”

ESV  Zechariah 11:17 “Woe to my worthless shepherd, who deserts the flock! May the sword strike his arm and his right eye! Let his arm be wholly withered, his right eye utterly blinded!”

Ezekiel 34:1 The word of the LORD came to me: 2 “Son of man, prophesy against the shepherds of Israel; prophesy, and say to them, even to the shepherds, Thus says the Lord GOD: Ah, shepherds of Israel who have been feeding yourselves! Should not shepherds feed the sheep? 3 You eat the fat, you clothe yourselves with the wool, you slaughter the fat ones, but you do not feed the sheep. 4 The weak you have not strengthened, the sick you have not healed, the injured you have not bound up, the strayed you have not brought back, the lost you have not sought, and with force and harshness you have ruled them. 5 So they were scattered, because there was no shepherd, and they became food for all the wild beasts.

The Door into the Sheepfold

ESV  John 10:1 “Truly, truly, I say to you, he who does not enter the sheepfold by the door but climbs in by another way, that man is a thief and a robber. 2 But he who enters by the door is the shepherd of the sheep. 3 To him the gatekeeper opens. The sheep hear his voice, and he calls his own sheep by name and leads them out.

The above verses speak of the shepherd of the sheep entering into the sheepfold through the door, which the gatekeeper opens. Clearly, the gatekeeper would not open the gate for a thief, a robber, or a stranger. 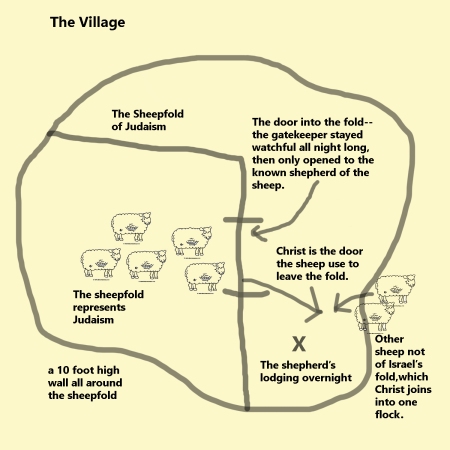 “…Christ presented Himself to Israel in a lawful manner, that is, in strict accord with the Holy Scriptures.” (Pink, 555)

Rephrasing the above quotation, Jesus entered the fold of Israel by the door.

“…the ‘door’ was the legitimate and appointed entrance into the fold, and this figure meant that the Messiah came by the road which Old Testament prophecy had marked out beforehand.” (Pink, 512-13)

This helps a great deal to explain why Jesus said, “Truly, truly, I say to you, the Son can do nothing of his own accord, but only what he sees the Father doing. For whatever the Father does, that the Son does likewise.” (John 5:19)

See also (Deuteronomy 18:18), “I will raise up for them a prophet like you from among their brothers. And I will put my words in his mouth, and he shall speak to them all that I command him.”

Christ did not deviate from either the prescribed words or actions the Father had preordained in Scripture, but did everything upfront and legal, according to all the terms of the Old Testament prophecies of the future Messiah.

Jesus entered the fold of Israel by the door, while all who went before him, namely the Pharisees to whom he was speaking, were thieves and robbers trying to climb over the wall.

The Pharisees were self-appointed rule makers and monitors who did not have credentials from the God of Israel–neither their positions, nor their words nor their actions were God’s. They performed no miracles, and they verbally rebuked and severely punished the weak and needy of God’s flock, even casting them out, as they had done to the man born blind.

NIV  Matthew 23:4 They tie up heavy, cumbersome loads and put them on other people’s shoulders, but they themselves are not willing to lift a finger to move them.

Christ, on the other hand, met all the requirements for Messiah preordained by God through centuries’ worth of Old Testament scripture. God certified Christ as true and genuine both by the words that Christ spoke and by the miracles Christ performed. (Remember the faultless logic of the blind man in chapter 9, when he demonstrated that, “Never since the world began has it been heard that anyone opened the eyes of a man born blind. 33 If this man were not from God, he could do nothing.” (John 9:32-33)

The Door into Salvation

When exiting the sheepfold, the sheep exit through the door of Christ into salvation. [Yes, the figure changes, and the meaning of the symbols shifts somewhat. I guess that Jesus is allowed to mix his metaphors a bit.]

ESV John 10:9 I am the door. If anyone enters by me, he will be saved and will go in and out and find pasture.

The “entering” spoken of here concerns salvation. The sheep exit the door of the sheepfold of Judaism and national Israel, through which Christ had properly entered. They don’t just exit, however. They simultaneously enter into Christ and the eternal life of salvation which he is.

Jesus is not saying that people go in and out of salvation. The going in and out and finding pasture represent the freedom in Christ of salvation. He explains further the eternal assurance of salvation for believers in the next section of chapter 10.

Jesus’ sheep from Judaism form a new flock with believing Gentiles and other believers (for example, those who lived before Israel became a nation) of all times, peoples, tribes, and languages. This flock is one flock, no longer enclosed by the sheepfold of national Israel and Judaism.

John 10:16 And I have other sheep that are not of this fold. I must bring them also, and they will listen to my voice. So there will be one flock, one shepherd.

What Makes Jesus a Good Shepherd? 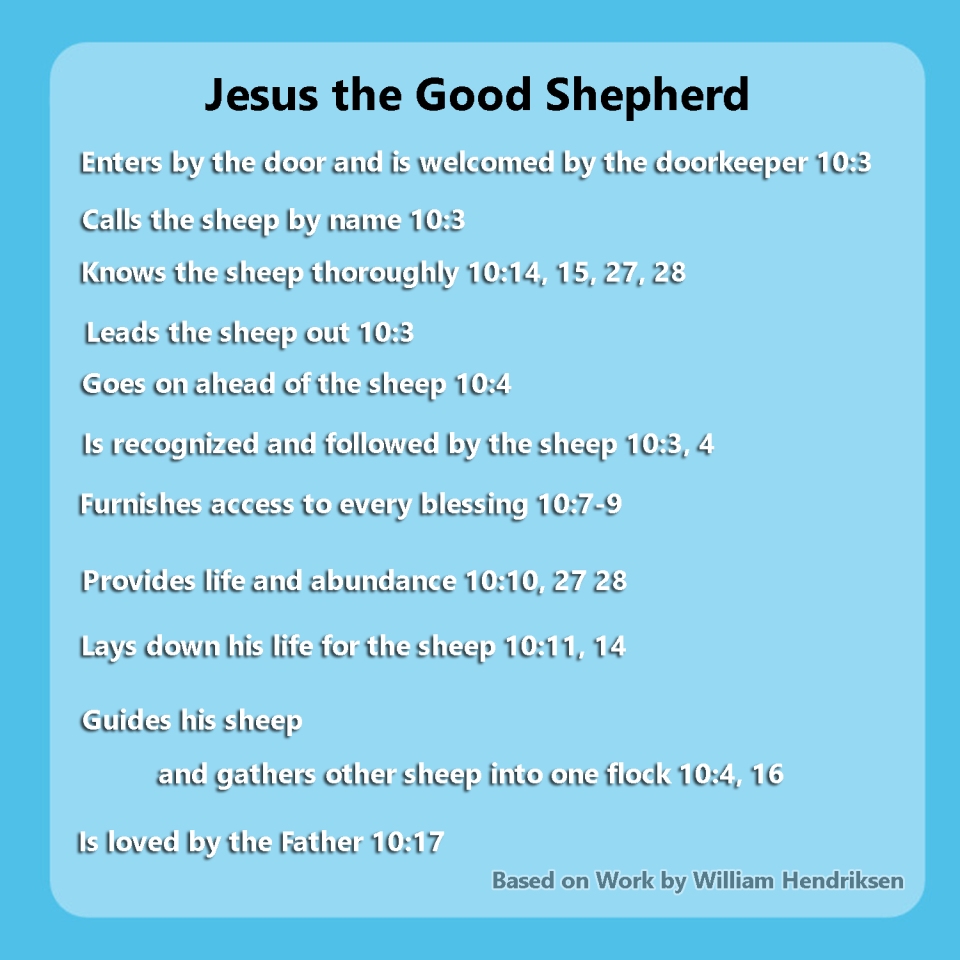