The Penitential Psalms: A Fresh Look 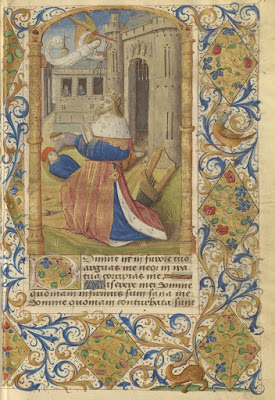 What are the Penitential Psalms? If you said, “I don’t know,” then you’ve just explained why we have difficulty understanding them today. Most people have never heard of them, unless they attend an Orthodox liturgical church. So if you’re protestant, evangelical, or Catholic, why bother?

Little is known about the very early history and origin of the grouping of what later became the seven penitential psalms. Within the already Catholic tradition, the earliest information this author found is that fourth century Gregory of Nyssa classed Psalm 6, the first of the seven, as “confession and penitence” (1 Waltke, Laments, 43). Still later, St Augustine, before his death in 430 CE, repeatedly read and wept over four penitential psalms that had been written out and pinned to the wall in front of his bed. Which four they were has not been preserved (2). Cassiodorus, a sixth century Roman statesman, is apparently the first to have named the group of seven psalms as 6, 32, 38, 51, 102, 130, and 143 (3). These seven psalms eventually worked their way into the public liturgy of the Catholic church, and just as eventually were deleted. They were removed in 1911 from public reading and sidelined to private devotions (Ibid., 160-61). John Ubel describes their status within the Catholic church in 2014, “The penitential psalms are not collected in any currently approved liturgical text emanating from the Holy See, despite the intentions of the council and those entrusted with carrying out the liturgical reform” (Ibid., 165). Within the Eastern Orthodox tradition, although the nomenclature “penitential psalms” is known, these seven appear singly in varying portions of the liturgy. Each has its own distinct use and purpose. For example, Psalm 6 is used in Great Compline, Psalm 32 immediately after baptism, Psalm 38 in Orthros, and so forth (4). Evangelical churches tend not to focus on deep study of the Psalter, and most likely “Penitential Psalms” is not a topic often considered.

If you managed to wade through the previous paragraph and are still with me, you may be yawning profusely, scratching your head, and saying to yourself, “I can’t take much more of this. This is not why I read the Psalms.” And in my opinion, you would be correct.

I love John the Apostle’s statement in 1John 2:27:

But the anointing that you received from him abides in you, and you have no need that anyone should teach you. But as his anointing teaches you about everything, and is true, and is no lie– just as it has taught you, abide in him (ESV).

The “anointing” John proclaims is the Holy Spirit of Christ, which every believer receives from the Father. He is the Spirit of God who lives within believers and is the source of their new birth (see John chapters 3 and 4, 6:63, 14, 15, and 16).

What John is saying is that each believer is connected to Christ the Son and through him to God the Father by means of the indwelling Spirit of God. Christ is the Living Word, and as such, he is quite able to communicate to every believer the messages from the Psalter which he wants to impart. He does this with all of Scripture. Therefore, the true value of studying Psalms is not to be had by reading about them in the words of someone else, such as the ancient church fathers and my words to you right now, but their true value is in hearing the Spirit speak into your own heart the Lord’s message to you in particular.

My purpose here is to hold up a road sign to you that says, “Have you tried this pathway through Psalms?” The pathway we will consider is Christ and his cross. Even in the so-called grouping of seven Penitential Psalms, we find Christ ever present and revealed. These psalms are not primarily about experiencing emotions of penitence designed to lead us to repentance. Rather, they are primarily about the life of Jesus Christ during his incarnation.

My premise is that Psalms reveal Christ. He is their primary focus. As we see Christ revealed, we also learn about God’s love for us, and that is what makes them important.

In future posts, we will consider each psalm individually and from a variety of angles (5).

5 Following is the complete index of the Penitential Psalms series on this blogsite.

The Penitential Psalms: A Fresh Look

Penitential Psalms: The Amazing Psalm 6–Windup to the Pitch

Penitential Psalms: After Psalm 6–Psalms 7 and 8

Penitential Psalms: Psalm 32–How Could Christ Pray the Words of a Sinner?

Penitential Psalms: Psalm 102–Who Is Speaking?

Penitential Psalms: Psalm 143–Knowing Who We Are in Christ