Jesus Heals Paralyzed Man in a Miraculous Display of Grace, Love, and Power

Click here for: Link to the Outline of the Gospel of John

ESV  John 20:31 … these are written so that you may believe that Jesus is the Christ, the Son of God, and that by believing you may have life in his name.

ESV  John 5:1 After this there was a feast of the Jews, and Jesus went up to Jerusalem. 2 Now there is in Jerusalem by the Sheep Gate a pool, in Aramaic called Bethesda, which has five roofed colonnades. 3 In these lay a multitude of invalids–blind, lame, and paralyzed. 4  5 One man was there who had been an invalid for thirty-eight years. 6 When Jesus saw him lying there and knew that he had already been there a long time, he said to him, “Do you want to be healed?” 7 The sick man answered him, “Sir, I have no one to put me into the pool when the water is stirred up, and while I am going another steps down before me.” 8 Jesus said to him, “Get up, take up your bed, and walk.” 9 And at once the man was healed, and he took up his bed and walked. Now that day was the Sabbath. 10 So the Jews said to the man who had been healed, “It is the Sabbath, and it is not lawful for you to take up your bed.” 11 But he answered them, “The man who healed me, that man said to me, ‘Take up your bed, and walk.'” 12 They asked him, “Who is the man who said to you, ‘Take up your bed and walk’?” 13 Now the man who had been healed did not know who it was, for Jesus had withdrawn, as there was a crowd in the place. 14 Afterward Jesus found him in the temple and said to him, “See, you are well! Sin no more, that nothing worse may happen to you.” 15 The man went away and told the Jews that it was Jesus who had healed him. 16 And this was why the Jews were persecuting Jesus, because he was doing these things on the Sabbath. 17 But Jesus answered them, “My Father is working until now, and I am working.” 18 This was why the Jews were seeking all the more to kill him, because not only was he breaking the Sabbath, but he was even calling God his own Father, making himself equal with God. 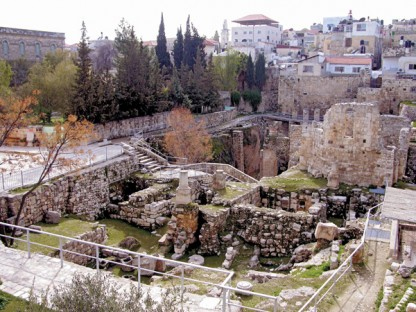 Summary: While the first two signs both occurred in Galilee, this the third sign occurs in Jerusalem. Its reservoir was uncovered in 1888 at the time of repair work on the church of St. Anne in northeast Jerusalem. (Hendriksen, Vol. 1, 190) Jesus saw a man there who was “withered,” that is, dried up or paralyzed. He couldn’t walk and had other difficulties with movement (vs 7). Jesus knew that he had been there a long time and asked him, “Do you want to be healed?” Not giving a direct answer, the man described his difficulty in being healed by the only means he knew–self-effort to move his disabled body into the water quickly, before others, who had outside help, got in. Apparently, they believed that only the first person into the water during moments of “stirring” would be healed. Jesus then gave him a direct command, “Get up, take up your bed [which was about the size of a yoga mat], and walk.” And the man did so.

It happened to be the Sabbath when Jesus healed the man. Immediately the religious leaders of the day challenged the man with the accusation that lifting and carrying his mat on the Sabbath was illegal, according to their Jewish law, as interpreted by them. He announced his healing to them by saying that the man who healed him had told him to pick up his mat and walk. Not knowing who the man was, the conversation ended. The healed man next shows up in the temple, where it says, Jesus “found” and encouraged him with the words, “See, you are well! Sin no more, that nothing worse may happen to you.”

The man went back to the Jewish leaders and told them that Jesus is the one who had healed him. From that moment on, the Jewish leaders began to persecute Jesus for breaking the Sabbath law by healing and commanding the one healed to pick up his mat and walk. When confronted, Jesus replied, “My Father is working until now, and I am working.” The Jewish leaders understood this statement to mean that Jesus was calling God his Father, thereby claiming to be the Son of God, equal to God. From that moment forward, they not only persecuted Jesus, but they also wanted to kill him (vs 18).

A Sign That Displays Christ’s Amazing Power, Grace, and Loving Compassion for the Powerless, Unloved, and Alone

Some commentators appear to criticize the paralyzed man for a perceived lack of will, as though he engaged in a self-pity party. Yet, Lazarus, a dead man who had no will, is never criticized for himself not having improved his dead condition. Nor is Saul, who became the Apostle Paul, ever criticized for not having initiated his own salvation. Thirty-eight years is a very long time. The text indicates that the paralyzed man had attempted on several occasions to move himself into the healing water before the others (vs 7). And if his desire for healing had died along with his hope of its ever becoming a reality for him, doesn’t this all the more establish Christ’s perception and compassion?

Of all the multitude of disabled people lying by the sides of the pool (vs 3), Jesus chose this one, who had grown old with infirmity as his sole companion. This shows us that Christ is indeed sovereign in his election and that salvation and healing are by grace and not by any virtue of will-power (John 1:13) or positive thinking.

Similarities with Jesus’ Raising of Lazarus from the Dead (John 11:1-54)

When Jesus raised Lazarus, no one, not even his believing sisters Martha and Mary, expected or asked him to perform such a miracle. Likewise, the possibility of healing never entered the paralyzed man’s head.

Isaiah 60:1 Arise, shine, for your light has come, and the glory of the LORD has risen upon you.

Ephesians 5:14 for anything that becomes visible is light. Therefore it says, “Awake, O sleeper, and arise from the dead, and Christ will shine on you.”

Ephesians 2:5 even when we were dead in our trespasses, made us alive together with Christ–by grace you have been saved–

Isaiah 26:19 Your dead shall live; their bodies shall rise. You who dwell in the dust, awake and sing for joy! For your dew is a dew of light, and the earth will give birth to the dead.

By Christina Wilson in A. Bible Studies, Academic/Biblical, Gems from John on October 13, 2016.
← Jesus Builds Our Insufficient Faith Blessed Are the Meek →